Who is Lee Harris?

Colette Appel and Lee Harris capturing the 2002 Jr. Pair US National Title
Lee Harris was born and raised in Harrow, Ontario Canada where he began his figure skating and hockey career at age three. He quickly excelled in both sports, and by age 17 he was competing internationally for Canada in figure skating and playing Canadian Jr. Hockey.

In 2000, Lee moved to Hartford, Connecticut to concentrate on his figure skating career.  He became the 2002 National Jr. Champion and competed in the 2002 Jr. World Championships in Hamar, Norway. Lee retired from the competitive figure skating world in 2006 after many senior international events and 6 national championships. Following his retirement from competitive skating, he toured for five years as a professional figure skater, performing shows on Royal Caribbean cruise ships.

While training in Hartford, Lee began coaching skating skills to youth and high school hockey players. With his unique combination of hockey and figure skating skills, he quickly became recognized as a valuable asset to the higher-level organizations, and he began coaching players in the East Coast Hockey League (ECHL).

In 2011, Lee moved to Columbus, Ohio and quickly made an impact on both the figure skating and hockey organizations in the area. In 2012 and 2013, he led his pairs figure skating team to the US Figure Skating Championships, and Lee became a nationally ranked figure skating coach. On his hockey side, he founded the Lee Harris Skating System (LHSS) in 2012 and began running several skating camps and clinics.
In 2014, Lee became the skating consutlant  for the Columbus Blue Jackets (NHL) and their affiliate team in Springfield, Massachusetts, the Springfield Falcons (AHL) which is now the Cleveland Monsters (AHL), in Cleveland, Ohio.
​ Lee was apart of the 2015-2016 Lake Erie monsters (AHL) Calder Cup championship team as their skating skills coach.
​ In the 2017-2018 season, Lee began his work with the Mens and women's hockey teams at The Ohio State University as their skating conditioning/specialist coach. Both teams would get berths into the Frozen four that season.

Lee lives in Delaware, Ohio with his wife, Chelsea and his daughters Sadie and Lana. 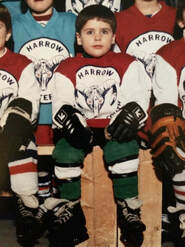